The Baltics – a region that is home to over 1,200 years of Jewish heritage. Both Lithuania and Latvia have produced an abundance of scholars and thinkers and Rabbinical greats- such as the Vilna Gaon, a world-renowned Talmudist scholar. Many North American Jews can trace their family roots to this part of the world that at one time was the birthplace of the top Jewish writers, scientists and scholars. Yiddish was widely spoken and the tour includes a visit to one of the few remaining Yiddish institutes in Vilnius, once called the “Lithuanian Jerusalem.”

Both Latvia and Lithuania were part of the Nazi occupation and we will visit memorial sites and interactive museums such as the Zanis Lipske Museum- the “Underground Railroad” where numerous Jews were saved.

This tour takes you back in time to immerse yourself in the Jewish culture of past generations visiting shtetls, synagogues and other historic sites. 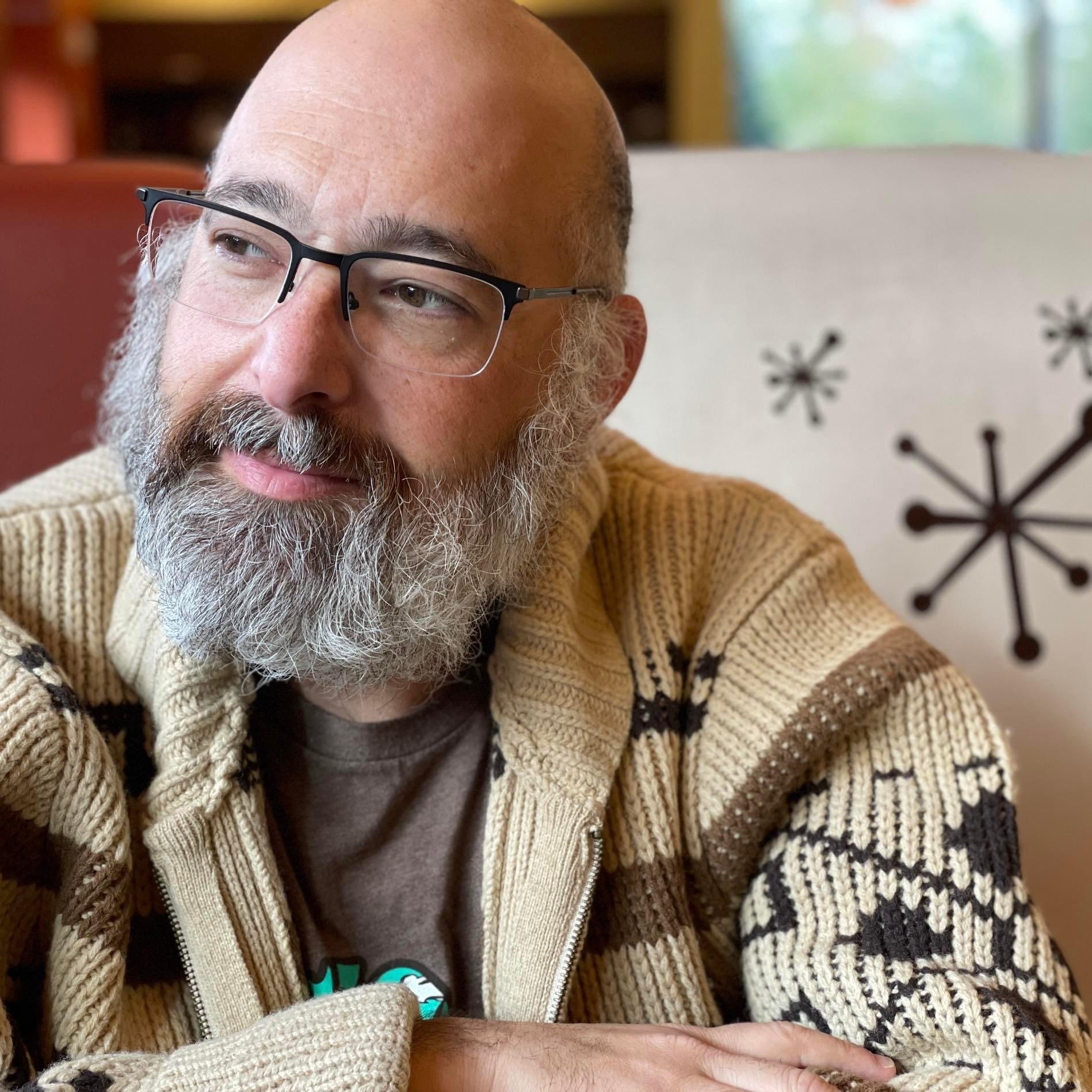 Rabbi Jonathan Siger currently serves as the Senior Jewish Educator at Hillel at Texas A&M and leads Congregation Jewish Community North in Spring, Texas. Boston born, New York raised, Rabbi Siger is a graduate of Brandeis University and the Hebrew Union College-Jewish Institute of Religion. Prior to entering rabbinical school, he worked with theater companies in Boston, Chicago and Pittsburgh. He is a graduate of the conservatory and former assistant producer at The Second City, Chicago. His improvisational theater experience inspired the creation of Divine Comedy Bibliodrama Workshops which apply the techniques of Improv Comedy to Text study. Before moving to Houston, Rabbi Siger worked for Hillel Foundations as a Campus Rabbi at the University of Florida, Gainesville and later as the Executive Director at Central Florida Hillel based in Orlando. These branches of Hillel serve some of the largest populations of college-aged Jews in the world. It was at the University of Florida that he introduced Torah on Tap, a program that has become popular and replicated across the country.

Arrival in Vilnius Airport where you’ll be met and transported to your hotel for an afternoon to relax and evening welcome reception to meet Rabbi Siger and the group.

Jews have been living in Lithuania since the fourteenth century and have left a great cultural heritage.

This morning, after breakfast, we will tour the historical center of Vilnius (Vilna) starting from Gediminas Castle and then proceeding to Cathedral Square, President’s Palace, and Vilnius University. Later, we will visit the old Jewish Quarter’s narrow streets and the courtyards of the middle-age ghetto, Great Vilna Synagogue, and Shulhoyf. Vilna Gaon, the great Jewish scholar who was born 1720 in Belarus, spent a significant portion of his life in Vilnius. This city is a center of the struggle between the Mitnagdim and Hasidim. You’ll also behold the street of famous Jewish sculptor Mordekhai Antokolski and the world-renowned Strashun library that had more than 6000 volumes of Judaic literature at the end of the 19th century. Next, we will visit the territory of the Large Ghetto, the courtyard of the Judenrat, the fight of the Ghetto prisoners against the Nazis and finally, a visit to the Jewish State Museum.

In the afternoon we’ll visit a Jewish cemetery and the grave of the Vilna Gaon. You’ll also experience the “Cheap Houses,” big dwelling houses built by Baron Hirsch for the less fortunate Jews after the Great Flood, and the world-famous printing-house “Widow and Brothers Romm.”

In the late afternoon meet our resident expert for a “Behind the Scenes” look at Shtetls in Lita. A story of Jewish life in Lita, in small villages, a story of the Yiddish language and local Jewish traditions. Lecture will be held at the Vilnius Jewish public library.

Today starts with a tour of Kaunas (Kovna), the interim capital of pre-war Lithuania. En route we will visit Ziezmariai, a little shtetl that includes a restored wooden synagogue, and the charming old city of Kaunas. The tour also takes us to L. Zamenhof and A. Mapu streets, Slobodka, a Jewish suburb of Kaunas and the ghetto during WWII, and the Old Jewish cemetery.

We’ll see the building of the famous Slobodka Yeshiva founded by Rabbi Nathan Zvi Finkel and discuss the Musar movement and the influence of R’ Israel Salanter on Slobodka Yeshiva. Also, we’ll talk about the personality of Rabbi Isaac Elhanan Spector, after whom was named RIETS, which is part of Yeshiva University in New York. Later, we’ll visit Kovna Choral Synagogue, the Children’s Memorial courtyard, the Golda Meir school, and the Chiune Sugihara house/museum – a Japanese consul in Kaunas in 1940 who issued 6000 lifesaving visas for the Jewish refugees from Lithuania, Poland and Germany.

Final stop in Kaunas – the IXth fort. During the years of Nazi occupation, the Ninth Fort was put to use as a place of mass murder. 45,000 to 50,000 Jews, most from Kaunas and largely taken from the Kovno Ghetto, were transported to the Ninth Fort and killed by Nazis and Lithuanian collaborators in what became known as the Kaunas massacre.

We’ll then continue to Trakai, the ancient capital of Lithuania‘s princes which is located among some of the region’s most scenic lakes. We’ll visit the Trakai museum and then return to Vilnius to visit to the site where the Jews of Vilnius were murdered en masse in the Ponary Forest.

Before the dinner, time for one more lecture – where you will learn more about Yiddish language – the language of the Ashkenazim, Central and Eastern European Jews and their descendants.

This morning, we’ll set out toward Riga, the capital of Latvia, and travel north to Panevezys (Ponevezh) where we’ll see the building that housed the Country’s famous Yeshiva.

Our second stop is Pakruojis synagogue – the oldest wooden temple in Lithuania. It’s more than 200 years old! Continue to the town of Siauliai (Shavli) to see how the Jews lived, especially the renowned Frankel family.

We will enjoy lunch at the amazing Art Nouveau style Chaim Frenkel Villa! There was a time when the owner of this beautiful building, industrialist Chaim Frenkel was one of the best-known Jewish entrepreneurs in the world!

Next stops is one more Jewish Shtetl – Joniskis with two fantastically rebuilt synagogues, and finally you will stop at the beautiful Rundale Palace – a masterpiece of Italian architecture courtesy of B.Rastrielli, who also built the Winter Palace in St. Petersburg. Reaching Riga in the early evening we will celebrate the Shabbat together at the Riga Community House.

Today, after breakfast at the hotel, we will participate in Shabbat services at the famous Peitava Synagogue – the only that survived Holocaust and is still an active house of worship. After services, we will enjoy a city tour of Riga, which includes Riga Castle, the fortification wall of Riga, the Swedish Gate, the building of Parliament of Latvia-Saeima, and the Monument of Liberty. The tour continues by car along the central boulevards of Riga, passing by city canal parks, the Bastion Hill, the Powder Tower, the Latvian National Theater, the Fine Arts Museum, the Art Nouveau buildings of the beginning of the 20th century, the Freedom Monument, University of Latvia, the Opera House, and the Daugava River and its cool bridges.

In the afternoon we’ll visit Zanis Lipke Museum, a shelter for the rescued Jews from the Riga Ghetto and compared to the Anne Frank House in Amsterdam.

Later in the day we will head to the coast to enjoy the sunset in Jurmala and Havdalah on Jurmala beach.

Morning Riga market tour to truly understand the local way of life- meet the local farmers, butchers and friendly Latvians. After which you will have a walking tour of Moscow district in Riga. Officially known as Latgales, the Moscow District feels like a film set with its old wooden buildings, quiet streets and unusual atmosphere. In fact, because the area has hardly changed in 50 years, it has actually been used as a backdrop for quite a number of films.

Next, we will venture into the territory of the WWII Jewish ghetto, you’ll find new real estate developments, century-old art nouveau buildings being renovated and artists looking for cheap accommodation. Truth be told, the Moscow District is changing, and in 10 years we might not recognize it anymore.

You will also visit the Riga Ghetto Museum. The museum building dates from the second half of the 19th century. Before the war, it hosted warehouses and stables. In the territory of the museum, the land is lined with stones from the streets of the Ghetto. A memorial wall carries over 70,000 names of Latvian Jews who fell victims to the Holocaust and about 25,000 names of Jews from other European countries who were brought to Riga to be murdered.

The museum has several permanent exhibitions. They tell not only about the tragedy of Latvian Jews during World War II, but also about their lives in pre-war years, their religious traditions, their contribution to the fighting for Latvian independence, their role in education and culture. The territory of the museum also has several memorial objects.

And finalizing the tour you will visit Biķernieki forest is the biggest mass murder site during the Holocaust in Latvia with two memorial territories spanning over 80,000 square metres (860,000 sq ft) with 55 marked burial sites with around 20,000 victims still buried in total. 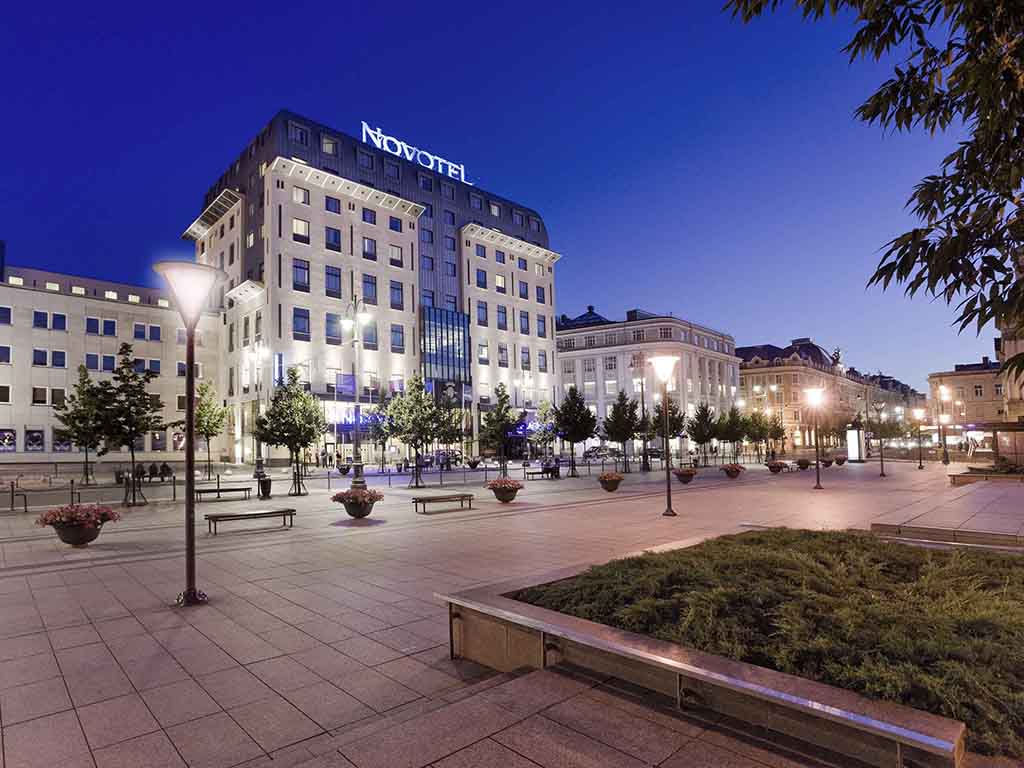 Being set in the centre of Vilnius, close to Vilnius University, Novotel Vilnius Centre offers a play area, a bar and a flat screen TV. Featuring 159 rooms with views of the old town, this venue is set within a short ride from the 3-story 15th-century brick Gediminas Tower.

The accommodation is within 5 minutes’ walk of Money History Museum of the Bank of Lithuania and 850 meters away from the Classical-style Roman Vilnius Catholic Cathedral. The city centre is close by, about 5 minutes’ walk away.

You will find Lithuanian National Opera and Ballet Theatre within the immediate surroundings. 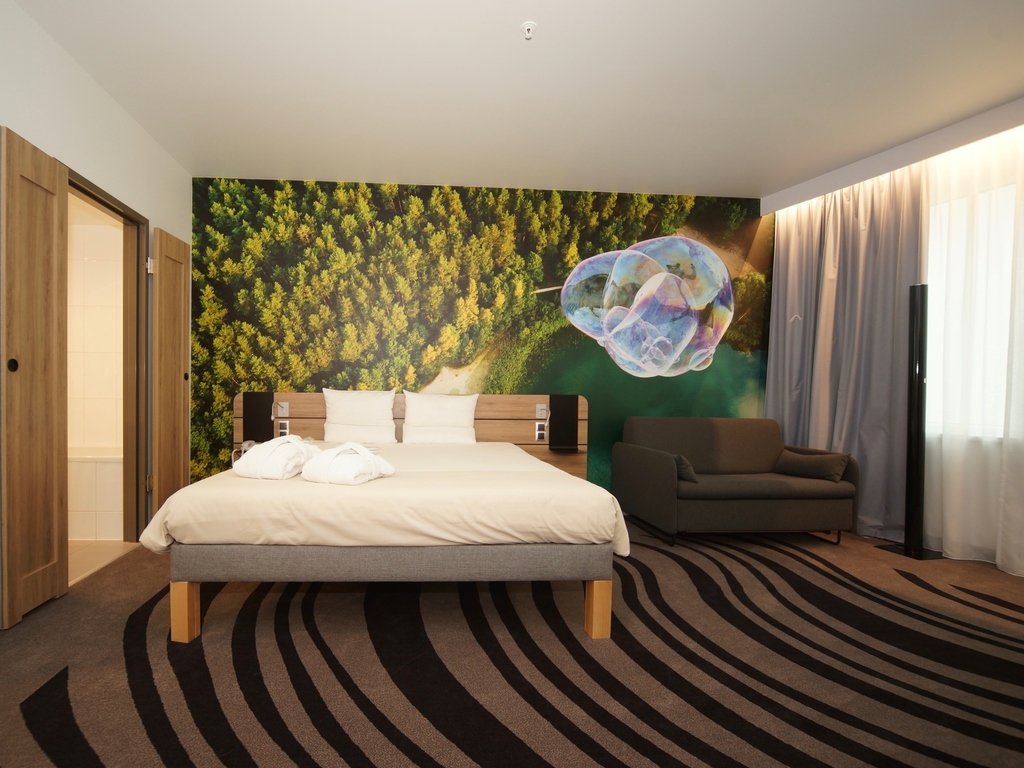 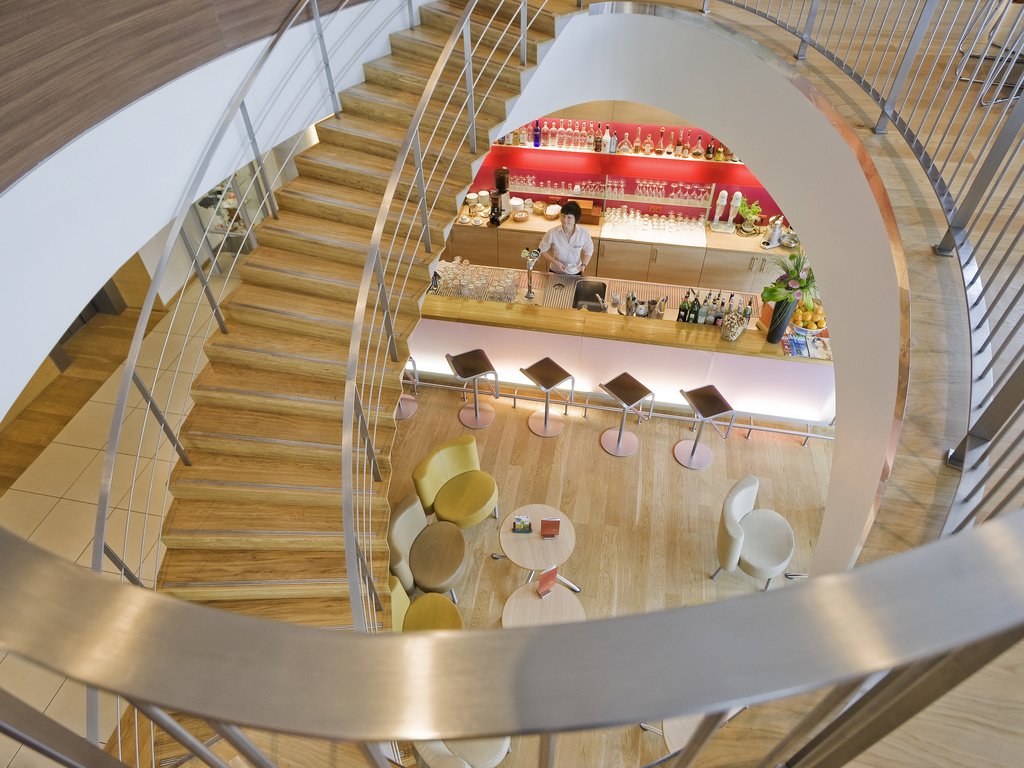 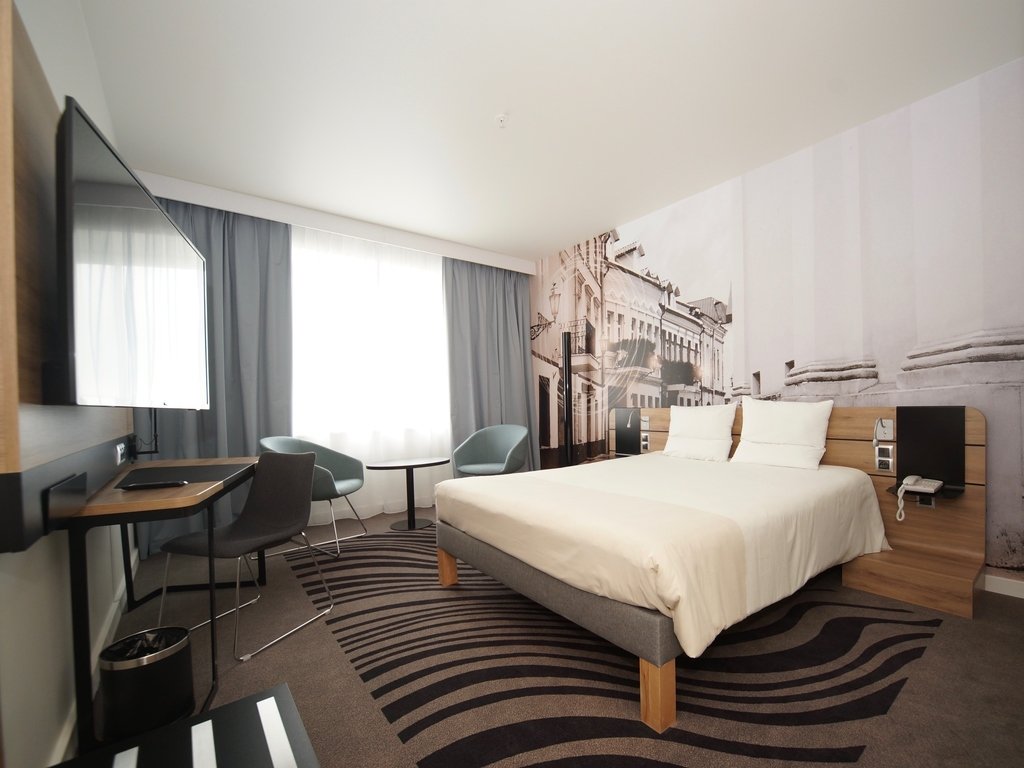 This picturesque riverside setting lies just 15 minutes from the airport and within walking distance of embassies and key business destinations. The hotel is adjacent to Riga’s Old Town, where guests can visit key historical sites such as the Blackheads House, Riga Dome Cathedral, Art Museum “Riga Bourse” and Presidential Castle. You will also find plenty of leisure activities with National Library, various gardens, Livu Aquapark and Riga Zoo less than 30 minutes away.

In addition to the magnificent scenery, we offer 8 room and suite categories all with comfortable furnishings and design. Included with each accommodation are coffee making provisions and in Superior Class rooms and higher – our signature Super Breakfast Buffet served each morning at Panorama Restaurant. This elegant on-site restaurant specializes in international cuisine and offers convenient room service. Both the restaurant and hotel lobby bar overlook the Daugava River creating memorable atmospheres for sharing delicious foods and drinks. Rabbi Jonathan Siger says “There is nothing that compares to immersive encounters when it comes to transformative experience. There is something about being there, in the places where our ancestors lived and struggled and built things, and sometimes died, that cannot be replicated by text study or even the most engaging of presentations. I am excited and more so grateful for the opportunity to reconnect with the past and to in some small way reclaim it with those participating in this experience.”

I AM READY TO BOOK, LET’S GET STARTED TODAY

These spots will fill quickly so don’t miss out and secure your spot today!

I WILL CALL TO ASK A FEW QUESTIONS

We are waiting to hear from you so give us a call with any questions.

Tennis in the Gobi Desert 2023